Evolution: How Does It Actually Work? 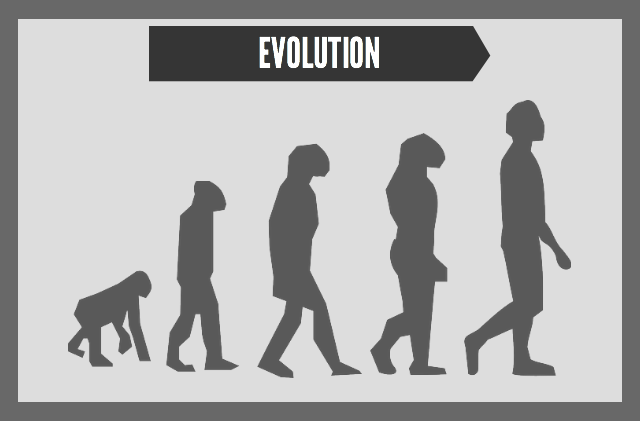 We’ve all heard of evolution and of associated words like Darwin and natural selection. But what do these things actually mean?

Many understand evolution to be the process by which humans came about. But in reality, don’t understand much about the process itself, or how it works. For example, many of us believe that humans evolved from monkeys. This is true in a sense – but it is far more accurate to say that humans and monkeys had a common ancestor. And that our evolutionary paths diverged at some point from that common ancestor.

Even in this one example, I’m sure you can see that evolution is much more complicated than just the process of getting from point A to point B in history.

So, let’s take a look at one of the most important systems in our world.

Evolution is defined as ‘descent with modification.’
This means that we see changes over time in the species (in super slow motion each time a new generation is born).

How Does Evolution Work?

On a broad scale, evolution works using natural selection. This is a blind process by which organisms better suited to their environments pass on their genetic information and survive.

Of course, this is not the only way that evolution works. But it is the most widely known.

Some other mechanisms (the main ones, though there are others) through which evolution affects life are:

Unfortunately, mutation isn’t quite as cool as the X-men made it seem. No one will have special powers because of it.

However, mutations can help an organism out, or kill them.

So, what is a mutation?

Well, when DNA is replicating itself, sometimes it makes mistakes. It is actually very accurate most of the time, though. And it is to this altered genetic code that we refer as a mutation.

Mutations can give an organism some beneficial characteristic that will help to pass on its genes. Thus propagating the mutation. Or they can mess up the development of an organism, resulting in impairments or death.

An example of a mutation that we’re all familiar with is the human ability to drink milk. The enzyme that helps us to digest milk disappears from our bodies some time after we stop breastfeeding. Because it isn’t necessary anymore.

But because of the domestication of cows and a mutation somewhere along the line, we now keep producing the enzyme long after we should have stopped. That means that everyone who is lactose intolerant isn’t a mutant!

This is a pretty important mechanism for evolution.

Let’s say that we have two populations of organisms that are slightly different to one another. But they can still reproduce.

Suppose that in the habitat of one of the population, food became scarce. And so the organisms therein started to migrate to the other population’s habitat where food was plentiful.

Eventually, these two different populations might start to reproduce. And should enough time pass, they might even become a new species. This is speciation – the emergence of a new species from some outside pressure.

This scenario would be an example of gene flow. Or when individuals move around and spread their genetic material in new places.

I know this sounds like the last one, but it isn’t quite the same. Genetic drift refers to the way that the gene pool within a particular community of organisms is distributed.

Some organisms will have more surviving offspring than others. This happens in every population. As such, those offsprings that are better at surviving will likely pass on more of their genetic material. And the gene pool will change.

So, as time goes on, the genes in the gene pool change as the organisms do. Genetic drift can become a problem, though. If there are no new genes adding to the gene pool and a particular gene is constantly winning out. This can cause a population to die out.

This mechanism is the one that everyone’s heard about. The one that Charles Darwin first wrote his theory.

Technically, all the others I’ve mentioned help this one to work. Now, I gave you a hint about what natural selection was about, but here it is in a bit more detail.

This process selects for the characteristics of an organism that are most beneficial to it given its current environment.

So, let’s imagine a population of organisms that can be different colors. If predators were more attracted to one color than the other, then that the organism of the less attractive color will be more likely to survive. And pass its genes on to its offsprings.

On the other hand, the organisms that get eaten more frequently will pass their genes on less. And might even die out as a result of predation. Thus, due to environmental pressures, one characteristic of an organism has won out over the other.

Genetic Variation and Its Importance

All these mechanisms are responsible for creating genetic variation. And are necessary for evolution. It is very important to have diversity. Otherwise, organisms would lose the ability to adapt, and likely die out.

And if you’re not sure about that: think about the huge diversity of organisms that we can see today. Everything’s interrelated you know.

How can these species that we know of today have come about from one organism and these processes?

Well, for one thing, humans are a tiny blip on the timeline of the Earth. And evolution has been around way longer than most of us can comprehend.

And since the first organism, evolution hasn’t stopped working. Due to all the mechanisms mentioned above, species kept changing. From there, a new one would diverge.

This happened again and again and again until there developed a phylogenetic tree. It’s a chart that lets you see the relationships between organisms and where they might have branched off from one another. This tree is so large that we still haven’t managed to discover or to classify everything on it to this day.

Yes, it is. We can see it happening in real time in organisms. Bacteria, for example, produce new generations with new adaptations every few minutes.

In fact, we’ve even got some new mechanisms of change at work, like artificial selection.

What is Artificial Selection?

Artificial selection is what happens when humans choose a certain trait in an organism that they want and breed for it.

Let’s break it down.

But this isn’t the only example – here’s another that we’re all more familiar with than we realize. Five hundred years ago, dogs looked nothing like the dogs that we’re familiar with today. During that time, humans bred dogs for practical things like exceptional hunting skills, speed, and so on.

But as time went on and dogs became more of a fashion statement rather than something practical. People started to breed for aesthetics.They came up with the idea of ‘purebreds’. A dog that had all the qualities most prized for its breed and bred, specifically for those characteristics.

But the chase for aesthetics has resulted in purebred dogs having lots of health problems. Another reason that genetic variation is good for an organism’s survival.

Another example that we’re familiar with is – crops. Today, farmers might choose a crop that bears plentifully. Or one that has particularly big fruit and can pollinate their plants using their genes. So it will have another generation with said desirable characteristics. As you can imagine, humans are having a big impact on modern day evolution in many different areas of life.

There are many other things that tie into the way the evolution works. To understand it all, you have to dive into micro and macro biology. I am hoping, though, even if it’s just a little bit, you now know some of the incredible complexity that makes up one of the most important concepts on Earth.

Want to explore even more? Have a look a look at this video made by Kurzgesagt, an excellent video explanation of how evolution works.