How Can Evolution Be True if Chimpanzees Still Exist 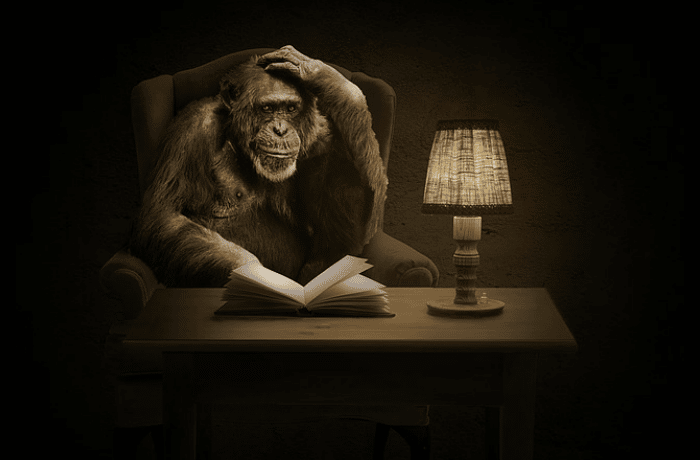 Perhaps you have heard someone say that humans evolved from chimpanzees. But chimpanzees are still around. So how do you explain that? If this evolution idea is true, how are our ancestral species still alive?

The simple answer is that we did not evolve from chimpanzees.

This question is based on an incomplete understanding. But it gives us a great starting point to dispel some misconceptions about evolution and scientific theories. And learn about our own origins along the way.

The concept of evolution by natural selection was introduced in the late 1850s almost simultaneously (but independently) by Charles Darwin and Alfred Russel Wallace. Darwin gets all the glory for it. But the fact that they independently arrived at the same conclusion was a good sign for the idea.

Evolution by natural selection is the way organisms and species transform over time through changes in inherited traits, either physical or behavioral. These changes confer a greater ability to survive and reproduce.

The ability to survive and reproduce is termed “fitness”. But don’t confuse it with physical fitness brought about by diet and exercise.

This is why people sometimes say that evolution is “survival of the fittest”. Natural selection takes small changes (mutations in genes) and magnifies them throughout the species. Genetic mutations can come about through random errors in replication or repair of DNA or damage from chemicals or radiation.

Let’s say a genetic mutation causes an individual to be better able to avoid predators. This could be a gene coding for a different color that better blends into the environment. Then it will be more likely to survive long enough to reproduce. When this individual reproduces, it will pass on this color mutation to its offspring.

This process, small changes leading to an altered trait in a population over several generations, is called microevolution. As more time passes, a new species can arise through the accumulation of new traits. This is macroevolution.

Many lines of evidence from multiple fields support evolution by natural selection. That is why it is now considered a solidified theory.

The scientific method begins with an observation. For example, imagine that you see that the flower you planted in your garden isn’t growing very well. The next step is to ask questions and gather information. Your question here is, “Why is my flower not growing well?” You might notice that the flower is in the shade.

At this point, you would come up with a hypothesis, a hunch that might give you an answer to your question. In this case, your hypothesis would be that the flower isn’t getting enough sun.

Now, you’ll test that hypothesis. Leave the original flower where it is. Plant a different individual of the same type of flower in a sunnier spot. You would have to make sure to treat it the same way as the other one. Water it and fertilize it just as often and with the same quantities.

After testing, you’ll analyze your results and draw some conclusions. If the flower in the sun doesn’t grow any better than the one in shade, you should reject your initial hypothesis. The amount of sun does not affect how well the flower grows.You’ll have to come up with another hypothesis and conduct more tests. If the flower in the sun does grow better than the one in the shade, however, your hypothesis could be right. This doesn’t mean it’s proven, though.

There are so many other factors that you can’t prove a hypothesis, only support it. Here is where researchers go on to perform many repeated tests. If you repeat the experiment many times under different conditions and the conclusions still hold, then a theory is developed. This theory is a legitimate explanation for an observed reality.

A theory is basically a framework for facts. It’s how facts are organized to make sense of them. So, far from being simply an idea, which is closer to a scientific hypothesis, a scientific theory has been rigorously and repeatedly tested. And all lines of evidence point to it being an accurate explanation for why or how something occurs.

The Evidence for the Theory of Evolution

Evidence from various fields, such as paleontology, geology, genetics, and developmental biology supports the theory of evolution by natural selection. The most well-known of these lines of evidence is from paleontology.

Paleontologists have uncovered fossils from organisms that lived billions of years ago. In some cases, transitional species have been found, called “missing links”. These fossils have traits intermediate between already-known species. This provides a link between the species that otherwise could not have been seen. 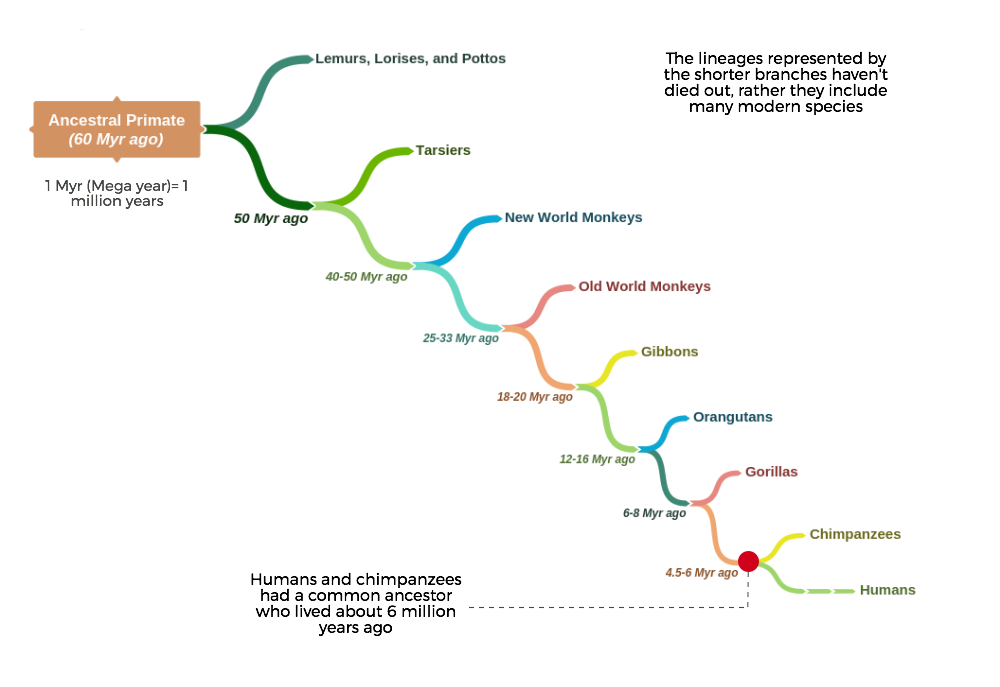 Now that I’ve beaten you over the head with the difference between the everyday use of the term “theory” and a “scientific theory”, let’s get back to our original question. How can evolution be true if chimpanzees still exist?

According to the theory of evolution by natural selection, chimpanzees and humans are both descendants of a common ancestor. This common ancestor gave rise to both lineages around 6 million years ago.

If we go back even farther, we’ll find the ancestors of all primates, proto-primates that lived around 65.5 million years ago during the Paleocene Epoch. They lived in North America and Europe, looked like squirrels, and probably inhabited trees. By the end of the Eocene Epoch, around 34 million years ago, they had died out. They were replaced, however, by their descendants, the first true primates.

These primates lived in North America, Europe, Asia, and Africa, and looked like modern-day lemurs. They differed from proto-primates in that they had larger brains and eyes and shorter snouts. They were beginning to look less squirrel-like and more monkey-like. And they were developing the larger brains that characterize primates.

These changes continued to multiply until the first anthropoid monkeys emerged sometime during the Oligocene Epoch (between about 34 and 24 million years ago). Humans are anthropoids, so these monkeys were the first of our primate lineage. Also during that time period, monkeys arrived in South America, likely having drifted on floating clumps of vegetation or perhaps having crossed land bridges from Africa or North America.

These “New World” monkeys, as they have been named, evolved separately from their “Old World” ancestors. South American monkeys all lived in trees, while the African, Asian, and North American monkeys had both tree- and ground-dwelling species.

Around 25 million years ago, the first apes evolved in Africa. These apes brought with them another increase in brain size. Two groups arose from these new apes: the lesser apes and the great apes. The lesser apes include modern-day gibbons and other similar species.

Then, about 6 million years ago, our lineage broke off from that of chimpanzees and bonobos, giving rise to the hominins. Several species evolved from this branch, including Neanderthals, Australopithecus, Homo habilis, and Homo erectus. Of those smaller branches, we, Homo sapiens sapiens, are the only ones left, having likely evolved from a lineage including the latter three species.

Archaic Homo sapiens are thought to have evolved from Homo erectus about 500,000 years ago. These archaic species then gave rise to our species between 160,000 and 140,000 years ago.

Once you have all the information, it’s clear that evolution and chimpanzees are not mutually exclusive. Rather, the theory of evolution by natural selection explains their very existence and our own.

For reference and more information watch this video by Richard Dawkins: