9 Strangest Looking Creatures From the Kingdom of Under the Sea 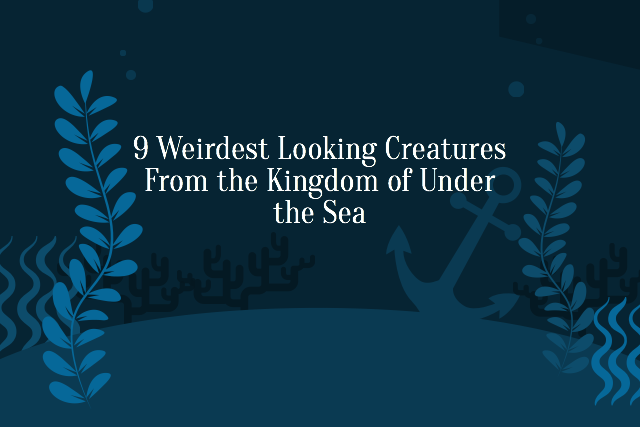 I bet you’ve seen some pretty weird looking animals in your day. But, more than likely, unless you scuba dive or take submarines frequently, it’s unlikely that these animals are as weird as they get.

You see, it is the marine animals who have evolved in conditions completely different to anything on the land that end up looking particularly strange, at least to us (who knows, maybe we’re just as funky looking to them as they are to us).

These conditions are so alien to us, that we know more about outer space than we do about the deep sea (pun intended).

So, sit back, relax, and let me take you on a tour of some of the craziest looking sea creatures that we’ve discovered to date. 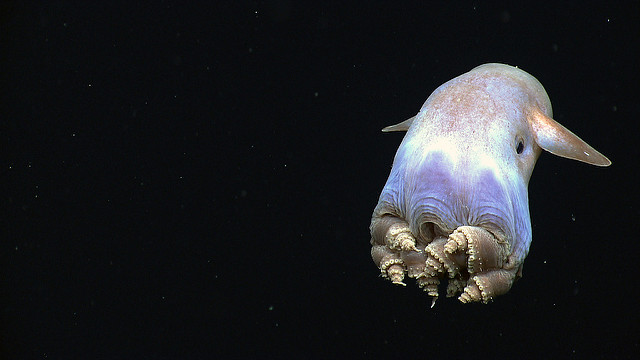 This octopus is kind of ugly cute. You know, like when you see a pug with a squashed face and you can’t quite figure out why you still think it needs a hug?

While it looks nothing like its namesake, it does have two large, rounded fins protruding from its mantle (the sort of a pointy bit on top), and it is for these fins that it is named.

The octopus is a good deal smaller than the ‘common octopus’, only about 8 inches long. While it still has 8 tentacles, these tentacles are webbed and are designed more for swimming than the ‘multi-purpose’ arms that other octopuses enjoy. 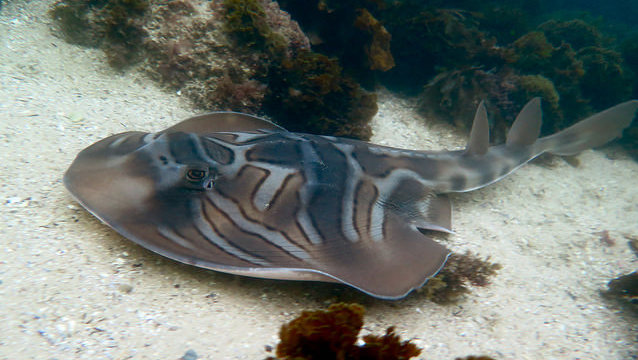 This ray, also known as the banjo shark (it’s not a shark, but it’s related to sharks), is beautifully colored.

There are patterns of brown, yellow, grey, lilac and black on the pectoral disk on this animal that make it quite distinctive (sort of in the shape on a banjo, hence the name).

The ray can grow up to about four feet long and lives mostly off of the coast of Australia. 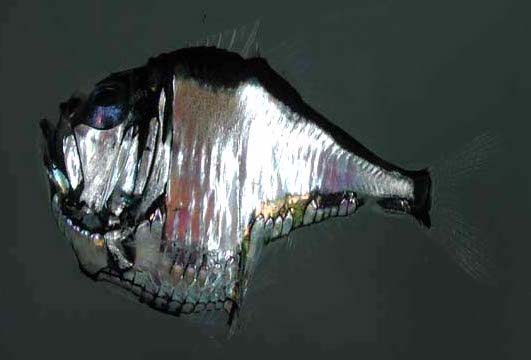 Following the trend of particularly imaginative names that we’ve seen on this list, this deep-sea fish is named after its distinctive hatchet-like shape (Google a hatchet or an axe – it will help you with the visual).

This fish does not have eyes on either side of its head in the way that many other fishes do. Instead, its eyes are on one side of its head and both point upwards which allows them to search for food coming from above.

Further adding to its good looks, the hatchetfish has a line of photophores (organs that produce light) running along the hatchet ‘edge’ of its body. In addition, the fish’s scales are so shiny that they almost look metallic. 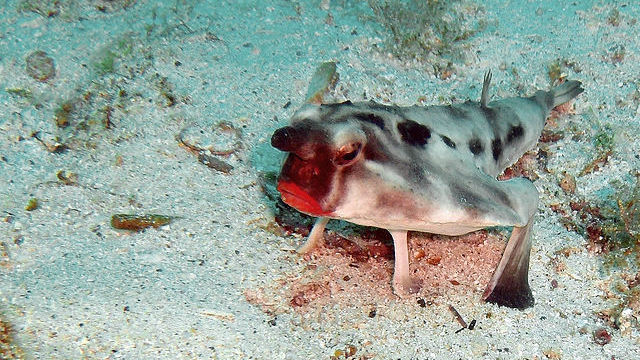 This poor fish was clearly spited by evolution. Not only is it flattened from life on the sea bed, but its fins are better adapted for walking on the ocean floor rather than swimming.

To add insult to injury, its lips look as though it tried to make up for its unsatisfactory appearance by taking on as much red lipstick as possible.

Now, you might wonder how its fins might be capable of ‘walking’ on the sea floor. Well, instead of having fins that point outward like most fish, this fish has pectoral and pelvic fins that curve inward and down, flattening at the tip like ‘feet’ of a sort.

The red-lipped batfish also has a horizontal body rather than the more vertical body that most fish have.

As you can see, because of these characteristics that make it an ‘outsider’, it makes sense that evolution would have tried to throw it a bone with the bright red lipstick. 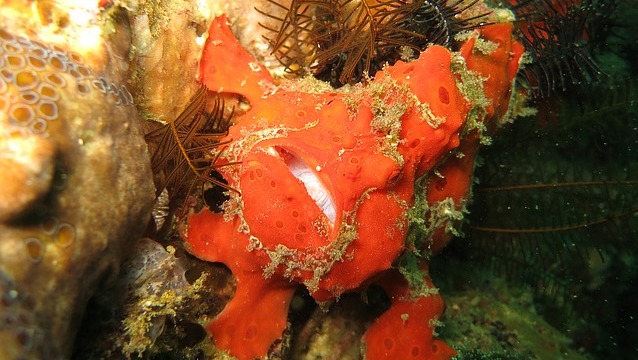 Shockingly, given the apt and descriptive names that we have seen so far, this fish does not resemble a frog in the least. In fact, its methods of camouflage are so impressive that it can resemble just about anything that it sees on the sea floor.

The frogfish can change its color from bright reds and yellows to duller pinks and browns. It can also change its texture.

Seriously! It can grow warts, funny bumps and protrusions, and wispy things, or smooth itself out in order to blend in more effectively with its environment.

It’s so good at what it does that it has become rather a competition among scuba divers to see if they can spot a frogfish while diving. 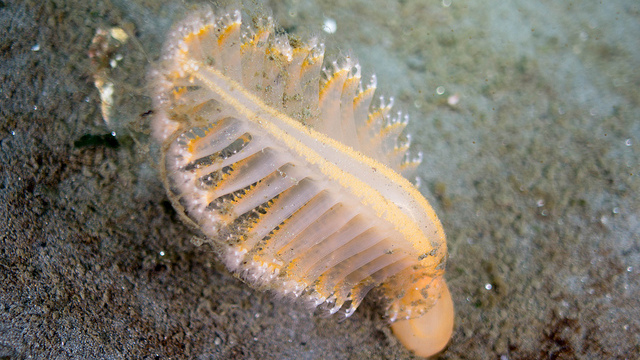 Of all the animals discussed so far, this one probably looks the least like an animal. It looks a bit like some sort aquatic feather or quill pen (where it got its name – it’s amazing how imaginative these scientists have been so far) that’s weighed down by a balloon-like apparatus at the end.

However, in reality, the sea pen is actually a colony of coral polyps that have different purposes. For example, some help to keep the animal fed while others make sure that it remains upright.

Even the sea pen’s coloring lends credence to the idea that it could be a feather. The animal is usually white or yellow or some color on the spectrum in between the two.

While they are mostly boring looking save for their feather-like structure, some sea pens can produce light from their bodies when the colony is threatened by predators. 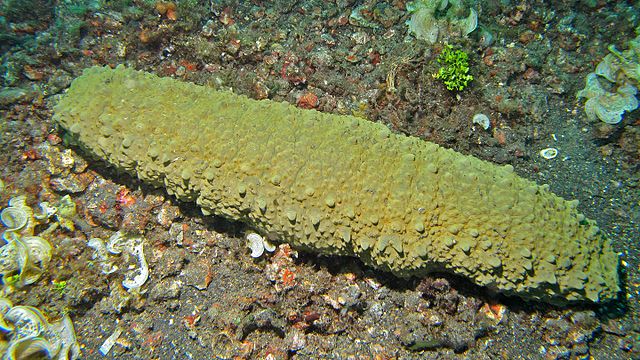 I’m sure you’re all enthralled with my descriptions thus far, and here’s another to not disappoint. The sea cucumber looks rather like a section of petrified large intestine.

They are between .75 inches and 6.5 feet long that is growing moss on the outside (it’s normally warty, with a dark color, making most people think of cucumbers – not me, though). It really doesn’t look like an animal either, to be honest.

However, the sea cucumber has an incredible defense mechanism. When it is attacked, it has the ability to eject all of its internal organs into the face of its attacker through its anus, and – wait for it – simply grow them all back later.

I guess this is one animal that really fits the phrase, ‘don’t judge a book by its cover.’ 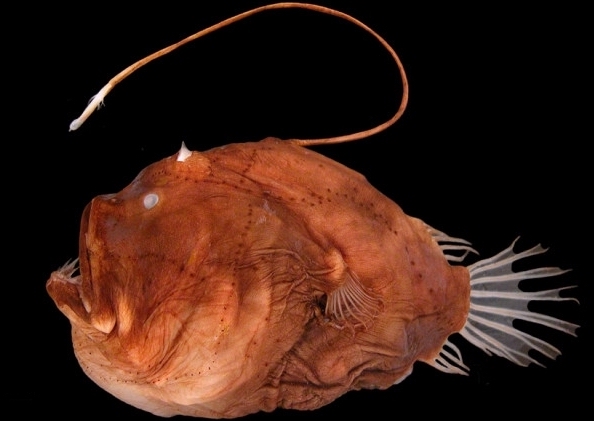 If not for the next animal on the list, the anglerfish would win the award for ugliest weird looking sea creature of the group that we’ve got here.

Seriously. We thought the red-lipped batfish had it bad. But apparently, when you live so deep in the sea that there’s basically no light, evolution doesn’t really care what you look like. Go on. Google it. You know you want to.

The female anglerfish can get quite large, growing up to about 3.3 feet and 110 pounds.

The fish (dark brown or dark grey) also has huge, spiky teeth, tiny eyes and a large, fleshy appendage growing out of its forehead which is colonized by glowing bacteria, helping the fish to attract prey.

The male anglerfish, on the other hand, is absolutely tiny, and doesn’t do much in life.4 When he finds a female anglerfish, he bites her, digests all of his internal organs, and becomes a pair of gonads for the female to use when she is ready to fertilize her eggs.

What a life, right? 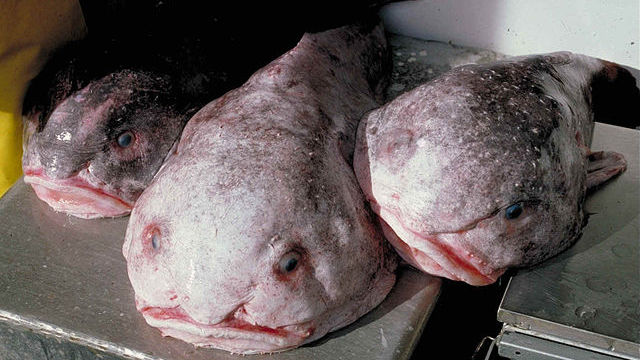 Please meet the ugliest fish you’ve probably ever seen. If you didn’t Google the anglerfish, prepare yourself and Google this one.

The blob sculpin really does look like a large, slightly squashed, pink blob with ill-defined holes for features like eyes and a mouth. The fish can grow up to two feet in length with fat heads rimmed with fins and skinny bodies with many fewer fins in comparison.

When underwater, the fish looks slightly less scary. But when it is caught, it looks deflated and squashed due to the lack of muscle tone characteristic of fish living at incredible depths in the ocean.

Most of the time, these fish just stay in one place, waiting to jump out and scare the life out of unsuspecting prey. That’s not quite how the scenario works, but you’ll admit after you’ve seen the fish that it’s not implausible.