5 benefits of meditation backed up by science [infographic] 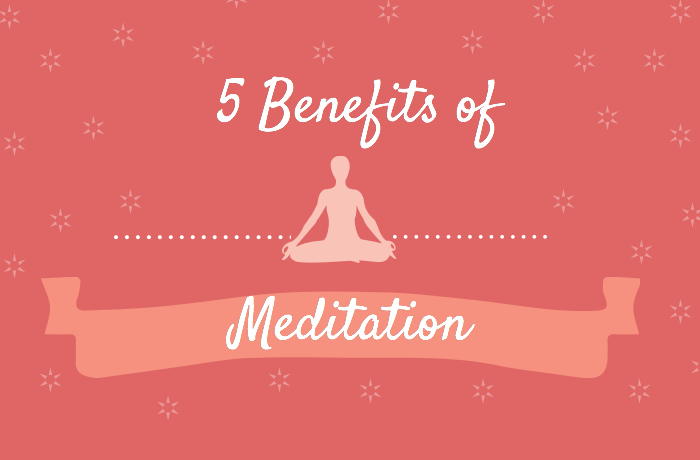 You’ll find a plethora of information on the internet advocating for (and against) the benefits of meditation. You’ll likely read that it calms the body, relaxes the mind, and is beneficial for overall health. Is it?

Let’s cut through all the information in the interweb and get down to the truth. Does meditation have any beneficial effect on the body?

Meditation is a very broad term that is difficult to characterize. There are a variety of different meditation practices out there, and all the different types advocate different methods and benefits.

However, the main goal of most meditation is to relax the mind, develop compassion and patience, improve health, and to internally regulate the mind.

When it comes to meditation and the potential benefits, we need to start with the brain. The mind-brain relationship (and the potential connections between the two) has been an exciting area of research for quite some time.

With new imaging techniques like EEG and fMRI, researchers know more than we ever have about meditation. Here are a few studies exploring the relationship between meditation and health benefits.

It May Slow the Ageing Process

Wait a minute. Can meditation actually stop us from aging?

Turns out that the answer may be yes.

Aging is most often associated with a reduction of the gray matter in the brain. One of the first studies conducted on this subject found that the brains of meditators had significantly increased amounts of gray matter as compared to non-meditators.

A follow-up study also showed how meditators can potentially protect themselves from some of the behavioral effects of aging. For example, meditators were shown to have a much higher cognitive capacity than those who did not meditate regularly.

Research out of Yale University tells us that meditation may keep our minds from wandering, resulting in increased focus.

A region of the brain known as the Default Mode Network (DMN) is responsible for our mind wandering aimlessly between insignificant thoughts. The researchers showed that meditators had decreased activity in this area of the brain and if they did lapse into the DMN, they could pop out of it more quickly than non-meditators.

Out with antidepressants and in with meditation?

Practitioners have long purported the effects of meditation on alleviating depression symptoms. Can it help?

A 2014 study found that mindfulness meditation resulted in a significant reduction in not only depressive symptoms but also anxiety related disorders.

A similar study conducted at John Hopkins University found that antidepressant medication had the same overall effect on symptoms as meditation did.

However, don’t just throw out your medication. In conjunction, these two techniques could be a powerful treatment method against depression.

Meditation Can Physically Alter Your Brain

Now this sounds like some science fiction stuff right here. Can meditating physically alter the structure of your brain? A 2011 study out of Harvard says yes.

The researchers showed that an eight-week course in mindfulness meditation resulted in increased brain volume in the hippocampus (the area associated with memory and learning) and other areas involved in emotion regulation. Not only were physical changes seen, a follow-up study showed that participants who underwent physical changes reported feeling better psychologically.

It Can Help Kick your Addiction

Because meditation helps regulate the areas of the brain concerned with self-regulation, many researchers believe it can be a weapon against addiction.

Meditation is not the gold standard for psychological treatment, but a growing number of studies demonstrate just a few of its purported benefits.

So, why not give it a try? If the research is sound, you may reap a slew of benefits.

Share this Image On Your Site Using Our Embed Code