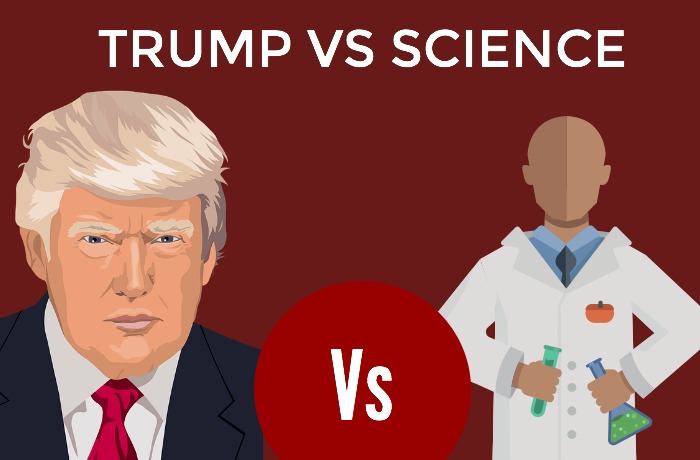 On November 6, 2012, Donald Trump tweeted his first comments on climate change. In his opinion human-made, climate change was a concept built by China with the purpose to harm the US economy.

A few years ago, it was not very important what he had to say but today it is.

During his campaign, Trump promised to exit the Paris agreement on climate change. He continuously remarked that he doesn’t regard it as a serious issue.

Some scientists might have sensed the problems of a possible Trump win in the elections back then. In September 2016, a couple of weeks before the election, 376 members of the National Academy of Sciences signed an open letter. Their aim was to draw attention to the reality and threats of climate change.

Now as President, his government is starting to restrict the freedom of scientists and science agencies. In his first day in office on January 20, all information about climate change disappeared from the White House website.

There have been social media restrictions and bans to the National Park Service (NPS), the Environmental Protection Agency (EPA), the Department of Health and Human Services.

Furthermore, the EPA has been ordered to delete content on their homepage related to climate change. According to The Guardian, EPA employees are afraid and concerned about the new governments’ attitude towards their works.

“If the website goes dark, years of work we have done on climate change will disappear,” one of the EPA workers told Reuters.

“There is a fear in the entire US science community … scientists are also hearing that budget cuts will be quite severe.”, said Christine McEntee, executive director of the American Geophysical Union.

Moreover, the news of a supposed gag order by the Agricultural Research Agency (ARS) to its employees attracted public attention. This order was later rescinded, as reported by BuzzFeed.

Christopher Bentley, communications chief of the ARS, took the blame upon himself. He said,

If I had to do it over again, I wouldn’t have said ‘public-facing’ documents.

Bentley claimed that the released statement referred to a standard operating policy at the United States Department of Agriculture (USDA). He pointed out that the media misinterpreted his words and that the procedure was not related to the Trump administration.

This putative false accusation stands alone and doesn’t distract the activists and scientists. The threat of the new administration is too evident.

After the inauguration of Trump, the science community has begun to show resistance all over the country. Some scientists make big efforts to save data about climate research. One example is the website “Climate Mirror”.

Not only Trump likes to use the advantages of Twitter. Another source of rebellion emerges with the unofficial twitter account of the NPS @NotAltWorld (formerly @AltNatParkSer). It has 1.3 million followers, more than the original account. The operators publicly attack Trump and tweet: “You can take our official twitter, but you’ll never take our free time!”

This is only one example for the formation of alternative accounts on twitter. Similar accounts exist for NASA, EPA, and several National Parks.

The Women’s March on Washington on January 21 drew tremendous attention worldwide. Other demonstrations all over the US against the election of Donald Trump as president accompanied the march.

That same day a group called Scientists’ March on Washington published a statement on their homepage that they are willing to organize such an event for scientists, too. The group proclaims,

Slashing funding and restricting scientists from communicating their findings (from tax-funded research!) with the public is absurd and cannot be allowed to stand as policy.

The Washington Post reported about an online discussion of scientists on Reddit. They exchanged thoughts about the best way to respond to the restrictions. A participant wrote,

There needs to be a Scientists’ March on Washington.

Many users showed their support. One of the users created a Facebook page which already has over half a million members. It is not clear yet when the march will take place. But the organizers of the twitter account @ScienceMarchDC with over 270000 followers published on January 26 that “an announcement of a date for the march will be released coming in the next few days…”.

People on social media are very enthusiastic and express their acknowledgment and support. “I am already following this group and awaiting a March date! Thx”, says one of the many posts from January 27. The organizers confirm that anyone, whether scientist or not, can take part in the march. They also invoke the future participants to note that the march will be a “peaceful, non-partisan gathering”.

Political Commitment of Scientists is Necessary

There is yet another interesting approach suggested by a group called 314. The name of the organization implies the first three digits of Pi and urges scientists to get involved in politics.

Their website refers to a statement by Janet Napolitano, president of the University of California,

When the voices of scientists are not heard, there is a price to pay.

In a report of The Atlantic, the founder of the group, Shaughnessy Naughton, said that the only way to enhance the current situation is to “get more people with scientific backgrounds at the table.”

Spokesmen of 314 are on their way to organize and offer seminars on political topics. After that, they want to support promising candidates. They plan to back only democratic candidates for now.

Even though this makes the issue party-related, Naughton claims that it only reflects the current situation. “When we’re talking about climate change, there’s a clear distinction between the two parties”, she says. The start of the project would at least impose a scientific influence on US politics in general.

A current example for the success of scientists in politics is given by German chancellor Angela Merkel. She is often regarded as one of the most powerful women in the world and was elected TIME’s person of the year in 2015. Her political success might have derived from her scientific education. Scientists can make use of many skills such as their analytical way of thinking.

“Scientists bring a unique perspective in how they look at data and think about problems”, says Karen Knuth, a member of the Minnesota Environmental Quality Board who served three terms in the Minnesota House of Representatives.

The fact that scientists are poorly represented in politics is not very surprising. Most of them are afraid to leave a lucrative career in science. Once going away from the academy, it is often difficult to return, because science underlies an on-going process.

Scientists must keep in touch with the newest publications and news in their field. Another possible problem is the culture-shock in the new environment of politics where different values and work ethics are imposed.

What Other Presidents Did In The Past?

Other governments in the past have also faced similar accusations. But the dimensions were not close to what is happening now. The Bush government tried to ban some parts of the climate change report by the EPA in 2003. The press even criticized the Obama administration for not providing enough access to EPA scientists.

“This is what has happened at the transition of every administration…it’s just a pause”, Christopher Bentley of the ARS told the Scientific American.

Michael Halpern from the Union of Concerned Scientists, a non-profit advocacy organization, doesn’t agree. He argues that there has never been a ban on science by politics before.  He says,

Other administrations have focused on reining in communications on policy, but not on science.

The current restrictions are reminiscent of a very difficult time for scientists. The story of the famous 17-century astronomer Galileo Galilei comes into mind. Galilei’s publications about the motion of celestial bodies were groundbreaking but controversial.

The pope was not amused because the discoveries stood in conflict with the views of the Catholic Church. In 1616 and 1633, Galilei was invited to the court of the Inquisition.

Both times he had to express his thoughts about Copernicus’ heliocentric world view, which opposed the Catholic doctrine of geocentrism. Both cases resulted in bans and restrictions for his scientific works including his writings in “Dialogue concerning the two chief world systems”.

Galilei had to revoke the heliocentric world view to save his life. It took over 350 years until Pope john Paul II. rehabilitated Galilei in 1992.

It is fortunate that today it is not a matter of life and death. Scientists are free to speak out against any kinds of restrictions by systems. The USA is witnessing the latest example these days.